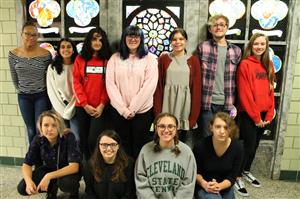 After four years of students inquiring about an art club at Parma Senior High School, it has finally returned!

Molly Deeks and Amanda Guzzo, art teachers at Parma High, have not only reinstated an art club at the school but are also in the works of applying to become a National Art Honor Society.

“(The district) cut clubs and organizations that students did not have to pay for (after 2015-16 school year), which included the art club,” Guzzo explained. “Since then, we had several students keep asking about having an art club. Honestly, we are here after school anyway, so we might as well do it.”

Deeks and Guzzo were determined to have a place where students could create beyond the classroom, especially since many students were not able to fit art into their busy schedules. They volunteer their time to run the club purely based on their passion for the arts and the desire to give access to those who want to express their passions as well.

Every Tuesday, the group meets in one of the art rooms, designing projects or working on skill-building activities. The organization’s goal is not only to better the artistic skills of many but to involve the entire school.

“It’s a way to better our school community and get kids involved in the building,” Deeks shared.

Instead of a regular art club, the two are guiding the club toward a national society similar to National Honor Society.

There are certain criteria that must be met that distinguish an art club from a National Art Honor Society, such as GPA requirements, community service hours, and dedication attending regular meetings.

There are about 15 to 20 students who currently come regularly to the club, and they all needed a teacher recommendation and at least a 2.8 GPA.

“This year is like a trial run for the National Art Honor Society,” Guzzo expressed. “We set up certain criteria that allowed students to be in (the club). We know most of them because we had them in classes, but we wanted to make sure the students were really dedicated and focused on art, rather than be a time to just hang out and socialize.”

Next year, the plan is to apply to become a National Art Honor Society member and hopefully do some more outreach outside of the building.

The club is centered on what the people of the school want to see, and what the artists want to create.

The group has had numerous requests around the school, but their first project being a mural in the PCSD Department of Information Systems conference room.

Staff asked for simply a technology-themed mural, giving the artists a lot of creative control.

The group has finished the design and painting will begin within the next few weeks.

Deeks said the club is also working on a card project for University Hospitals as community outreach. Students are creating greeting cards that will be placed on meal trays for patients during the holidays. Students in Deeks and Guzzo’s eighth-grade classes are also working on this project, too.

“We hope students build teamwork, especially creating this mural coming up, as well as collaborating and sharing their ideas, while being okay with maybe their idea not being the one the group goes with,” Guzzo expressed.

“And they will be able to experience different things because some of them have only taken 2D or 3D classes,” Deeks added. “Typically, overall, the majority of students are on the quieter side, so being able to give back in the building and contributing will be a good thing for them.”

PHOTO CAPTION: Members of the Parma Senior High School Art Club. The club has returned to the building recently after a four year hiatus.