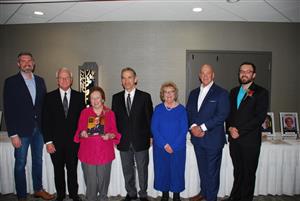 That loyalty and dedication to school, community, and country were on display November 1, 2019, in the school’s auditorium as nine former Redmen were inducted into the Parma Senior High School Hall of Fame.

With over 40,000 alumni, the Parma Senior High School Alumni Association is one of the largest groups of its kind in Northeast Ohio. Since 1981, they have inducted over 80 people into the Hall of Fame, with stories and accomplishments as distinctive and diverse as the community itself.

“We’re looking for people that not only made it in business or whatever their life’s work was, but most of them also have significant contributions to society itself,” said Mike Jaszczak, Parma High Class of 1981, and president of the Alumni Association. “They give back to their community. They are very much service-oriented people.”

The morning ceremony at the high school allowed the inductees the opportunity to speak directly to students, sharing thoughts and memories of their time in the school.  Later that evening, the inductees were invited to a dinner which formally recognized them in front of friends and family.

“We want students to know that they have every ability that these other people did,” Jaszczak said of the morning assembly. “They can go out in the world and make something of themselves. We really want to make sure that they see that.”

Below are descriptions of the inductees, including some of their statements to students at the event. For more information about the Parma Senior High School Alumni Association, and to nominate someone for future consideration into the Hall of Fame, please visit www.pshalumni.org.

Kareem “Kay” Ameen (1973): During his time at Parma, Ameen was very active in the school community, including playing three years on the Redmen golf team. After graduation, Ameen, along with best friend and fellow inductee George Schindler, enrolled at Bowling Green State University, where they both graduated in 1977. In 1980,  he became an owner of VR Business Brokers, and later owner and founder of the Amrap Cafe from 1989-1991 in Parma.

In 1991, Ameen and Schindler founded Hospitality Management and Hospitality Properties. The duo founded nine restaurants in the greater Cleveland area including Cabin Club, Salmon Dave’s, Blue Point Grill, Delmonico’s Steakhouse and Rosewood Grill. Their restaurants have been featured in the New York Times as one of the “Best Restaurants in Cleveland.” Ameen continues to serve as the Chief Financial Officer for Hospitality Management, bringing his financial expertise and decision making to these Cleveland culinary institutions.

Keith Dailey (1998): At Parma, Dailey was elected class president, the commencement speaker at graduation and played on the basketball team. After graduating from Ohio Wesleyan University, he served as Press Secretary for Ohio Governor Ted Strickland from 2006 to 2009. Later, he was invited, twice, to work with Barack Obama, both before and after his election as President. Currently, Dailey is the Vice-President of Corporate Affairs for Kroger, helping coordinate government relations, external communications and stakeholder relations for the company, which has annual revenues of $122 billion.

“Look around the world and try to find something that resonates with you and speaks to you,” Dailey expressed to students at the ceremony. “Take the leap to put yourself in the position to be responsible for that thing...It gives you a broader perspective and expands your ability to think about and solve big problems and big challenges, which, quite frankly, is something I think we need a lot more people in the world to be willing to do today.”

Minor George (1940): During his time at Parma Schaaf High School, George was elected three times as president of his class. After graduating, he served in the U.S. Navy during World War II, which included commanding a ship at Okinawa, eventually earning the Bronze Star for his heroic service to his country.

After earning his bachelor's degree and later his law degree, he served as chairman of planning and development projects in Parma throughout the 1960s, which saw the population grow from 5,000 residents to nearly 100,000. He was very active in politics on both the local and national level, including being elected three times to Parma City Council and serving as the Vice-Chairman of the Cuyahoga County Republican Party.

George was even more proud of his Lebanese heritage. He founded both the GCAAA (Greater Cleveland Association of Arab Americans) and the NAAA (National Association of Arab Americans). During the Arab-Israeli conflict during the 1970s, George met the heads of eight Arab countries during 1976 to help improve relations with the United States, including Yassar Arafat, King Hussein and President Hafiz Assad. In addition, he also was one of the original founders of the St. Jude Children’s Research Hospital.

Brian Kish (2003): Currently the youngest member of the Hall of Fame, Kish earned the rank of Eagle Scout while attending Parma Senior High. After graduating from Carnegie Mellon University with a degree in Architecture, Kish later earned his master's degree in Architectural Engineering Construction Management.

Specializing in green, sustainable architecture, Kish was Construction Manager for Carnegie Mellon’s entry into the 2007 Solar Decathlon, an eco-friendly house competition, displayed in Washington D.C. and viewed by over a quarter of a million people. Currently, he is an architect and designer for AE7 and directs a team of 20 designers working on 2,000 architectural and interior drawings.

“Be open to everything that is around you in high school,” Kish said at the induction ceremony. “I know sometimes it can be a drag. But, sometimes, there’s one little spark, or one little comment, or initiative, that can help change and direct you for the rest of your journey.”

Robert Mengerink (1968): Dr. Robert Mengerink is a leader in education in Ohio. After graduating from Parma Senior High, where he excelled in football, he later attended Edinboro University to compete in the sport at the collegiate level. Mengerink later earned his master’s degree in Educational Leadership from Cleveland State University and then his doctorate in Education Administration from the University of Akron in 1986.

“Our organization (ESCNEO) helps all the schools in Northeast Ohio, so I truly understand what makes a great high school,” Mengerink said. “I’m so proud to tell you that Parma Senior High is a wonderful school that is preparing you for whatever you are craving to become. That was true fifty years ago, and I know it’s true today.”

Thomas J. Regas (1977): Tom Regas has always been there for his schools and his community. After graduating from Parma, Tom continued his education at Cleveland State University majoring in accounting.  Extremely active with the school district, Tom has volunteered his time over the years with the Normandy Boosters, the Friends of Byers Field, Parma City Schools Foundation, Parma Senior High Alumni Association, and has helped support many school programs and issues on the ballot.

In 2006, Regas was elected to serve the residents of Parma’s Ward Four as their representative to City Council. He worked with residents to solve every issue possible in a timely manner. After stepping down from City Council, Regas continues to serve on the Board of Building Appeals. In 2006, he was named “Parma Democrat of the Year”.

“Have fun in high school,” Regas expressed. “Participate in all the different communities that you can while you are here. Take advantage of your teachers and advisers and let them get you ready for all the other communities you are going to be a part of soon.  You will be a member of many - work, families, businesses you start, decisions made for your country. Do your best to make them all better. But mostly, enjoy being a part of all of them.”

George Schindler (1973): Schindler, along with business partner, Kareem “Kay” Ameen, both graduated from Parma in 1973 and both played on the golf team. As great friends, they decided to both enroll, and become roommates at Bowling Green State University, competing on the varsity golf team. Schindler graduated in 1977 with a degree in Liberal Studies.

After Bowling Green, Schindler worked for Victory Station, traveling nationwide opening new restaurants. In 1991, he founded Hospitality Management and Hospitality Properties with Ameen, opening up seven restaurants since 1991.  They include Cabin Club, Salmon Dave’s Pacific Grill, Blue Point Grill, Thirsty Parrot, Delmonico’s Steakhouse, Rosewood Grill and Kingfish Seafood. Their success has been detailed in the New York Times and in Cleveland Magazine, who named Blue Point Grill the best seafood restaurant in Cleveland for nine consecutive years.  Schindler currently serves as president of Hospitality Restaurants, and both he and Ameen are active still with local Parma programs.

“The friendship we have (with Ameen) is truly why we succeeded in business, but more importantly with life,” Schindler expressed. “I would encourage you to look around at your friends and cherish those relationships you have now...I can’t even fathom that I got to where I did, coming out of these halls. But, it was a lot of hard work, but mostly with the support and love from my friends...Cherish it. Life’s really short and your friendships are going to be so very important to you.”

Dominic Scibilia (1967): Scibilia, the president of the Class of 1967, attended the Cleveland Institute of Art, graduating in 1972. He began his career as an illustrator at American Greetings, and later at E & R Graphics. In 1980, he was named a professor at the Cleveland Institute of Art, a position he held for 35 years. When he retired, he was named a Professor Emeritus in the Illustration Department at the school.

Scibilia has earned numerous awards for his artwork over the years, including the Victor Schreckengost Award at CIA and the Noisemaker Award given by the Northern Ohio Illustrators Society.  He was also named a Cleveland Magazine “Most Interesting Person.”

For many years, Sendrey continued to work in education both in Florida and North Carolina. During that time, she finished her education, earning an Early Childhood Education degree. Later moving back to Northeast Ohio, she served the PCSD in a variety of roles in Special Education, organized Hall of Fame events, breakfasts, and served as the chairperson of the 1959 Reunion Committee. She has also volunteered her time as a member of the Parma City Schools Foundation. She also “checks out” seniors at the end of the school year, as she welcomes them to the Parma Senior High School Alumni Association.

“You never know in the coming years that someone from your class will be represented in the Hall of Fame,” Sendrey explained. “Do not let what you cannot do, to interfere with what you can do. And always remember, ‘Once a Redmen, always a Redmen.’”