Annual Taste of the Towns highlights pride throughout PCSD 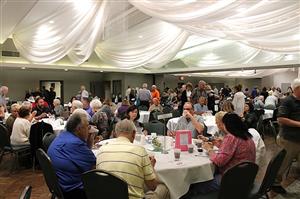 On September 25, 2019, community members from Parma, Parma Heights and Seven Hills enjoyed a night of music, laughter and great local cuisine at the eighth annual Taste of the Towns.

Sponsored by the Parma City Schools Foundation, Inc., this yearly event raises money to better support programs and initiatives for PCSD students and teachers.  Over $25,000 was raised during this year’s event, which was completely sold out.

The event allows guests to taste local food from a variety of local businesses. This year’s Taste of the Towns featured 24 different groups, including Corleone’s, Carrie Cerino’s, Swensons, Rosewood Grill, Barbicu, Mission BBQ and students from the district’s Career and Technical Normandy Culinary Arts program at the Sword and Shield restaurant.

“The businesses have such great respect for teachers,” Barbara Filipow, Trustee with the Foundation explained. “They said it over and over again. They were doing it because the teachers were great, and the kids are good, and they need to get as much help as possible. Many of the business owners went through the Parma School system.  They feel successful because of the education and training they received from the Parma Schools.”

Besides the wide variety of cuisine available, there was basket raffles, side boards and door prizes for attendees to win. One lucky person also won a 2019 Chevy Trax, donated by Serpentini Chevrolet. The event was emceed by PCSD Superintendent Charles Smialek, Ph.D., who handed the microphone over to various school administrators as the evening progressed.

Money raised from the Taste of the Towns directly funds programs for teachers and students. This past year, the Foundation gave away 12 grants to teachers throughout the district, supporting a wide variety of initiatives including flexible seating and diversified instruction. Additional money was donated throughout the years to school buildings for student incentives and field trips.

“All the money we raise goes directly to the schools for the kids,” Filipow added.  “It goes to all the kids, not just a certain group, but all the kids. That’s our passion. A real dream would be to have the Foundation grow as much that we could fund all the schools.  And then they wouldn’t have to have the different fundraisers that they have. They could concentrate more on the education than selling different things for fundraisers.”

The Parma City Schools Foundation, Inc. is always looking for volunteers interested in providing these needed supports for PCSD students and teachers. Anyone interested should contact trustees Barb Filipow at filipowb@parmacityschools.org or Craig Phillips at ctphillips1978@gmail.com.

More information about the Foundation and any upcoming events are available at www.parmacityschools.org/foundation.