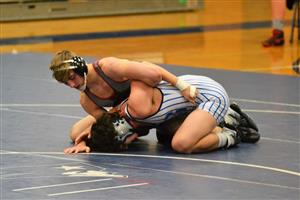 Gavin Ziol is a force to be reckoned with on the mat.

The consistency and enduring determination of this senior wrestler is what allowed him to break a ten-year old school record during his final season with the Parma Senior High School wrestling program.

As a four-year varsity starter and advancing three times to sectionals, it goes without question that Ziol was a heavy contributor to the success of his team during his time at Parma. He finished his senior season with 73 pins, topping the previous record of 68 set by currentParma High staff member, Kevin Shadrach. His final match left him with a total 105 wins and 46 losses, equating to a 70 percent winning percentage across the span of his four years.

“It's a mindset,” said Ziol when explaining how he approaches each competition. “I tend not to think too much, not worry about who I’m up against. I go out there to win and it comes easy for me.”

That may be an understatement. Ziol had participated in competitive wrestling since the third grade as well as football for nine years. He made it to the state wrestling tournament during his eighth-grade middle school season and has been recognized for his athletic achievement and work ethic on the football field.

“When I first started, I picked it up instantly and I came to love the sport,” said Ziol of wrestling. “Playing football has helped a lot in developing my technique in getting low and taking your shots, and it also has kept my agility and conditioning in shape for wrestling.”

Although he had no particular goal in mind entering high school, Ziol realized that his talent could propel him into school history while competing during his sophomore year. This was a very attainable accomplishment with the amount of positive coaches and teammates that surrounded him.

The Parma wrestling team competed as a family. Teammates and coaches are always mat side cheering, encouraging and pushing each other to get better every day. It was like a bond that could not be broken, Ziol shared.

¨Wrestling is unique because it's not exactly a team sport, it's individual,” Ziol expressed. “When you're on the mat everything depends on you, and you only. The weight is on your shoulders, win or lose, and that kind of stuck with me throughout the years.”