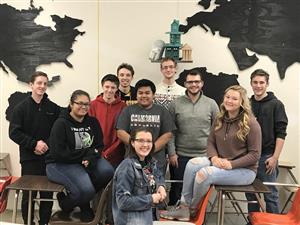 Is our universe real?  Do we have free will?  Is there life after death?

These questions and more are what the Parma Senior High Philosophy Club will be asking as they investigate the nature of knowledge and share their love of wisdom.

Philosophy Club was formed by two Parma High students, Logan O’Lasky and Jacob Rhyand, when they first sought to discuss their affinity for knowledge and social sciences with a book club. They later decided a club dedicated strictly to philosophy was the best course of action.

“I wanted to start the club with Jacob because I have always found that type of study interesting,” added O’Lasky. “I didn’t realize until I actually started looking in to (philosophy) that there were are so many different ways of looking at the world. Everything from idealism and materialism to the concept of free will.”

The Philosophy Club is a place for peers to voice their opinions and thoughts on the world around them. The club has open discussions about a variety of topics, some of which might be controversial. The members agree that their disagreements have brought them closer to new answers.

“I know everyone won’t see eye to eye, and I think that’s the beauty of the club,” said O’Lasky.

Anything related to philosophy is open for discussion at meetings. When the group meets on Mondays after school, they base the discussion on the chosen topic for the day. Club members educate themselves on the issue, then constructively argue for their side of thinking.

“Our goal as a club is to teach the students at Parma Senior High things they would simply not learn from a class,” Rhyland explained. “But, we also want to give them the tools to ask themselves questions about life and form their own opinions.”

Since the Philosophy Club is new, it has sparked the interest of both students and teachers in the building. A few teachers have sat in on a couple of meetings to hear the thoughts of their former and current students.

They have expressed their admiration for the group as they witness their lessons being used to answer the world’s unanswered questions.

“The end goal is to learn, to think of new ideas, to be exposed to new ideas and to grow from it,” O’Lasky shared. “I want it to be a learning experience.”

PHOTO CAPTION:  Members of the Parma Senior High School Philosophy Club meet Mondays after school to discuss and debate a number of subjects, drawing the attention of other students and teachers.